June 19, 2020
Tripoli: Last night, the individual depicted in the picture raised the call to prayer at dawn outside the normal time for that, for unknown reasons According to the local sources, the reason was that the ISIS, which controls the mosques, raised the call to celebrate the arrival of al-Qaeda members from Tunisia to Libya, including an aide (Ayman al-Zawahiri) 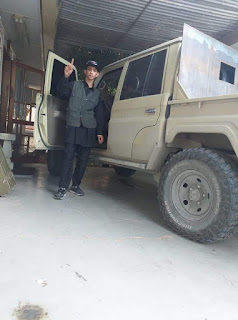 Misurata: Earlier, a member of a ISIS-affiliated militia  # Hamed_Al-Ammari from the city of Misurata was killed (indication being that his index finger was lifted proving that he belonged to ISIS). Additionally, one of the militias of 301 Misurata was also killed after their clash with the fuel smuggling group in the heat region west of Zawiya.
Tarhuna city: A local girl, Marwa Ammar Al-Mabrouk Makhlouf, committed suicide after terrorist militia stormed their house, in an attempt to kidnap her. To avoid being taken into sexual slavery, she threw herself from the top of her family's house. These abductions of women are common to the Turkey-supported militias, and are similar to ISIS abduction of Yazidi and other minority women.

Popular posts from this blog

June 19, 2020
Saraya Ansar, the a Shia Iran-backed Iraqi militia, enters Libya to support Turkey. This confirms reports of a recently concluded security cooperation agreement between Iran and Turkey, as well as rumors of close cooperation between the two countries on security and defense issues.

IRGC-linked vessel delivered a shipment of weapons to Misrata on 04/23/2020.
Consequently, the fighters were brought into the country from Turkey by barge. Photos of the fighters entering Libya taken on the ground in Misrata.

June 30, 2020
According to Middle East Monitor's Yemen News Portal, Turkey, which has been increasingly active in humanitarian outreach operations among Muslim Brotherhood controlled territories in Yemen is sending Yemeni mercenaries to Libya. Released intelligence reports indicated that approximately 200 Yemenis arrived in Libya to fight with the Al-Wefaq and GNA.
As MeMo reports,  militias affiliated with the Muslim Brotherhood's Al Islah party in Marib sent fighters to Turkey under the guise of receiving treatment in the hospital. From the hospital  they were allegedly transferred to Tripoli. There is speculation that the Islah party is trying to form a military alliance with Turkey by sending mercenaries to fight for Ankara in Libya, amid increasing reports of a possible Turkish intervention in Yemen.  Note: Middle East Monitor is a Qatar-backed publications.
Meanwhile, reports of human rights abuses by the Turkey-backed GNA militias, continue to accumulate. Abdel-Hamid Almdota informs th…
Post a Comment
Read more

Will #GNA-Affiliated Militias Cut off Electricity in the Benghazi Area as abductions and clashes continue?

June 22, 2020
As the tensions between Egypt, LNA, and GNA/Turkey are heating up, according to local sources, GNA affiliated militias were overheard discussing the possibility of cutting off electricity and/or Internet access in the Benghazi area in order to weaken LNA support and as a form of information warfare and control. Part of the issue is the collective punishment of the Haftar supporters. The other issue is prevention of further successful electronic attack by the LNA electronic support.
Meanwhile, scuffles among various groups continue on the ground.
Violations of the militia grous in the city of Tarhoun: A video clearly shows a Syrian mercenary fighting with militias, including what is known as deterrence, under the 42nd Militia battalion. They are representing themselves as Libyans and are siding with GNA-affiliated local groups. The individual who had ordered the targeting of the homes of the civilians is involved, and the individual implementing these attacks is a mercenary.

Irina Tsukerman
Mapkana, Inc. Executive Director Irina Tsukerman received her B.A. in International/Intercultural Studies and Middle East Studies from Fordham University in 2006, and J.D. with a focus on National Security from Fordham University School of Law in 2009, where she helped found, and later ran the local chapter of the National Security and Law Society. She specializes in human rights and security issues. From 2014-2015, she served as American Bar Association’s Young Lawyers Division’s National and Homeland Security Committee Vice Chair. She also published an essay on cybersecurity with the EastWest Institute and a paper on Russia's intelligence influence on Iranian propaganda with the George Mason University, which she presented at the Conference on Character Assassination and Reputational Politics. Irina is a native Russian speaker and is fluent in Spanish, and her other passions include peace-building, public diplomacy, and international law.